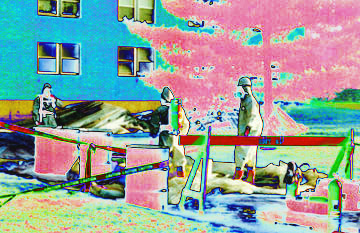 One in a Million

When I met Jennifer Folster in 1993, she lived in the basement of Capen Residence Hall at the State University of New York (SUNY) College at New Paltz, where two PCB transformers burned and released contamination into the building nine years ago this month. College administrators had assured her it was safe.

Dr. John Hawley was the state bureaucrat in Albany responsible for overseeing the health concerns related to the PCB and dioxin cleanup on the campus. He was responsible for Jennifer's health and safety. His title was the state's "Director of Environmental Health Assessment." I have talked Dr. Hawley perhaps a dozen times over the years as I waded through the New Paltz mess reporting on the PCB and dioxin issue for different media.

In one conversation, we got into the nitty gritty of the issue of "risk." Dr. Hawley finally said that the cancer risk for students at SUNY New Paltz living in Bliss, Capen, Gage and Scudder dormitories was one-in-a-million.

Dr. Hawley is a risk assessor, and what risk assessors don't like to tell you is that in their business, the word "risk" is really a code word for "incidence level." That means that when you say one-in-a-million, it's not like your chances of winning the lottery, but rather the actual projected body count from a chemical exposure. If his estimate was correct, if the dorms were cleaned properly and if, over the years, a million students live in those dorms, the state would have permission to off one of them with full impunity.

State Health Department Document 0549P, co-written by Dr. Hawley, is dated July 17, 1985. Jennifer was 11 years old when this document was written. Document 0549P, a risk assessment, is in effect the state's license to dose state workers with two picograms of dioxin each day in the state office building in Binghamton, NY, where a fire in 1981 spread PCBs and dioxins, which are very similar chemicals. At the time, Dr. Hawley and his colleagues assumed there was a no-effect level for dioxin exposure. They assumed PCBs were much less toxic then their chemical cousins. They made many other assumptions.

Those two picograms of dioxin that people would consume each day would be left behind in the building after the cleanup, which, after all, could only be so effective. Cleanups cost a lot of money. Forget the fact that the Binghamton state office building cost $17 million to build, and to get it clean enough to keep exposure down to two picograms of dioxin per person, per day, cost about $50 million and took 13 years. Dioxin is often accurately described as one of the most toxic poisons on Earth, but this does not do it justice. It's debilitating to the immune system, the endocrine (hormone) system, it's genotoxic (busts chromosomes), teratogenic (birth-defect causing) and responsible for a whole lot of other ills in every single organ system, including mental effects like depression and reduced sex drive.

When the fires and explosions occurred in New Paltz, Dr. Hawley dusted off 0549P and applied its statistical analyses to Bliss, Capen, Gage and Scudder Halls, and the Cokendall Science Building and Parker Theatre. The license to kill came to visit New Paltz. So did a lot of guys wearing air tanks and moon suits, which was the more obvious clue that something was up. Capen and Gage halls were reopened just a month after the disaster, with students walking in on the first day as moonsuit guys walked out, practically touching shoulders as they crossed paths.

Around this time, federal agencies such as the EPA were being prompted by the paper industry to review the toxicity of dioxin in hopes that it would be deemed safer. Dioxin is everywhere, not just in New Paltz. The paper business makes a lot of the stuff. The dioxin gets into rivers and pours out of smoke stacks (such as when you burn plastic and PCBs for example), and it gets around. If you eat a McDonald's cheeseburger or a slice of $25-a-pound brie, it's there. If you take a breath, there's some dioxin. If you test the fat of a polar bear living in the Arctic region, you find dioxin.

EPA's dioxin reassessment went on and on, miraculously surviving the Bush and Clinton presidencies. News coming back from scientists was not good, however. Nobody could find a no-effect level. That meant any level had a biological effect. They learned that the current dioxin body-burden, or level stored in the human body, is between six and seven parts-per-trillion, and that this level is enough to make some people sick from cancer, and many others sick from non-cancer illnesses. Meanwhile, dioxins and PCBs came to be considered the same thing for the purposes of toxicity assessment, because many PCBs behave just like dioxins in the body, attacking the immune system first and foremost, then the hormones.

Though Dr. Hawley did not know any of this in 1985, he had reason to know it as the years wore on. After all, he was a powerful state official overseeing expensive PCB and dioxin cleanups where many lives and families were at stake. But New York State did not review its risk assessment. It pretended that time had stopped in 1985, just like the director of the patent office who said a century ago that everything that could be invented had already been invented.

By 1992, the year Jennifer moved into Capen, I had, through my reporting, established that the heating systems in Bliss Hall had spread contamination through that building, but that the heat in Capen, Gage and Scudder halls had never been checked for contamination. There was no need to, state officials said; it wasn't contaminated. And after all, you couldn't check -- students were already living there. That was the same year that Jennifer was hospitalized for mononucleosis hepatitis of the liver and spleen; she never took her finals that semester.

By 1993, with the assistance of Gov. Cuomo, I established that ventilation ducts in Capen and Gage had never been tested for contamination. By June 1994, with the help of someone named Ward Stone, I had established in a Woodstock Times series that the Gage vents were indeed contaminated. They were then cleaned to the "arm's length." But the vents were never tested in Capen Hall, which means they were never cleaned. Jennifer, who saw the Capen vents, said last week they were coated with grease and dust, as were many other surfaces in the building. Based on these facts, it's fair to say nobody really knows how contaminated the dormitories are.

In 1994, with the reassessment of dioxin proceeding steadily, EPA estimated that as few as one-in-a-thousand people would get cancer just from carrying the typical body burden of dioxin. This did not include additional exposures from things like contaminated food, or living in Capen Hall. Nobody looked at Document 0549P or questioned its validity in light of this new information.

As the 1990s unwound, words like "endocrine disrupter" and "dioxin-like compound" and "synergistic effects" came into coinage to describe the dioxin problem. A national publicity campaign was launched by something called the "Wise Use Movement" to plant the idea in the public's mind that dioxin is not so bad after all. State officials, including the SUNY New Paltz administration, continue to reassure students, parents and the student newspaper that the dormitories are safe.

In 2000, the EPA official handling the dioxin reassessment, Dr. William Farland, said the agency was wrong about the older cancer numbers caused by the existing body burden of dioxin. They could actually be as low as one-in-a-hundred -- not counting additional exposures. But by 1999, Jennifer had already been diagnosed with acute myelogenous leukemia, which her doctors say can be caused by a genetic defect combined with a toxic exposure.

Did Jennifer get leukemia because she lived in Capen Hall? It's impossible to say for sure, but living there did not help her. State officials know they can't be accused, and have told me that for years: if someone gets sick, you won't be able to prove it. You can't blame us. People get cancer anyway. True indeed, and as it turns out, nobody is studying the health of students in the four poisoned dormitories, or on the campus in general, to see who else has cancer or other illnesses. After all, the buildings are safe.

"As a scientist, you only accept what you know," said Steve Lester, science director of the Clearinghouse for Environmental Justice near Washington DC. "What I have seen, over the years, a lot of things that I don't understand about how people got sick and reacted to chemical exposure. Based on the science, we would not have predicted any response. So there are other issues going on in these chemical exposures that scientists just don't understand."

Risk assessment has been compared to firing a gun into the crowd at a football stadium. You don't know who you're going to hit and not everyone is at equal risk. But a gunman firing into a crowd would not be found innocent of murder just because he didn't know the name of his victim. But somehow, in our world and in our community, Dr. Hawley or any other risk assessor would be.++