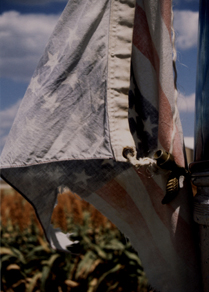 When all is said and done, they think
you can say more than you can do

If you ask the US Supreme Court, we have more rights to talk about sex than we do to experience sex. While the court has traditionally taken a liberationist view of sexual speech, reversing decisions that have banned many books and holding that a protester wearing a dungaree jacket in court that said "Fuck the Draft" was not contemptuous, its views on what grown men and women do in their own homes is not quite as generous. And when the court has woken up, it has often been years after it was necessary to state the obvious.

For example, it was not until 1967, a century after the slaves were freed, that the Court struck down a Virginia law which made marriage between a white person and a person of color a felony punishable by up to five years in the state penitentiary. That was in the 1960s, when the court was a bit more radical than it has been during our current generation.

Loaded with appointees of Ronald Reagan and George Bush, the court has taken the privilege of entering the private spaces of citizens that it had previously held as sacred territory, in particular, the marriage bedroom.

Hardwick was originally arrested for sharing oral sex with his male partner, but the charges were dropped. He brought suit against the state alleging that the Georgia sodomy law was unconstitutional and placed him in imminent danger of arrest. A married couple, anonymously named Mr. and Mrs. Doe, joined in the lawsuit, stating that their private activities and liberty were threatened by the Georgia law, for which they could (and still can) face 20 years in jail for a single act of consensual oral sex in their own bedroom.

The Georgia law which these people sued to overturn states:

The Supreme Court upheld the law. "Precedent aside, however, respondent would have us announce, as the Court of Appeals did, a fundamental right to engage in homosexual sodomy. This we are quite unwilling to do," the court held in the body of its landmark decision, throwing out the Court of Appeals decision.

But Chief Justice Warren Burger, ruling in one of his last cases, added a concurring opinion of his own, which we reprint in full. Ignore all the silly little numbers unless you want to do further research. Burger wrote,

I join the Court's opinion, but I write separately to underscore my view that in constitutional terms there is no such thing as a fundamental right to commit homosexual sodomy.

As the Court notes, ante, at 2844, the proscriptions against sodomy have very "ancient roots." Decisions of individuals relating to homosexual conduct have been subject to state intervention throughout the history of Western civilization. Condemnation of those practices is firmly rooted in Judeo-Christian moral and ethical standards. Homosexual sodomy was a capital crime under Roman law. See Code Theod. 9.7.6; Code Just. 9.9.31. See also D. Bailey, Homosexuality *197 and the Western Christian Tradition 70-81 (1975). During the English Reformation when powers of the ecclesiastical courts were transferred to the King's Courts, the first English statute criminalizing sodomy was passed. 25 Hen. VIII, ch. 6. Blackstone described "the infamous crime against nature" as an offense of "deeper malignity" than rape, a heinous act "the very mention of which is a disgrace to human nature," and "a crime not fit to be named." 4 W. Blackstone, Commentaries *215. The common law of England, including its prohibition of sodomy, became the received law of Georgia and the other Colonies. In 1816 the Georgia Legislature passed the statute at issue here, and that statute has been continuously in force in one form or another since that time. To hold that the act of homosexual sodomy is somehow protected as a fundamental right would be to cast aside millennia of moral teaching.

This is essentially not a question of personal "preferences" but rather of the legislative authority of the State. I find nothing in the Constitution depriving a State of the power to enact the statute challenged here.

Note how Burger references Judeo-Christian moral law as a foundation of his modern American secular judgment affecting the civil liberties of hundreds of millions of adults. Consistent with this view, he boldly asserts his belief that sodomy in which people give their consent is more evil than forced rape.

Another famous issue is that of birth control. We take for granted that we can stroll into 7-11 and purchase lubricated ribbed extra-large condoms at 4:25 a.m. in Galveston, Texas. However, as late as 1960, the Supreme Court upheld an 1879 (not a typo) Connecticut law banning contraception.

The following year, Estelle Griswald, the stately, Roman Catholic director of Planned Parenthood in that state, opened a birth control clinic staffed by volunteer doctors. She was arrested and prosecuted for distributing birth control. Four years later, on June 7, 1965, the court overturned Connecticut's ban on distributing contraception, but did nothing to block states like New York and Massachusetts from banning use of birth control -- even by married couples! That did not come until years later.

But contrary to its glacial or counter-productive positions on actual sex, the court has consistently held that it is legal to describe and depict sex in art and literature by overturning law after law against obscenity.

'Obscenity' is vaguely-defined legal term suggestive of when something is too sexually explicit, or in violation of community standards, to be legally permissible. But in a culture dedicated to a higher legal standard -- freedom of expression -- obscenity is a very difficult concept to define without marring or directly curtailing the freedom to create art or literature. Or, for that matter, to think.

The famous federal case defining the issue is Miller v. California (1973), which holds that something is obscene if three conditions are found by the jury to be met simultaneously: (1) If the predominant theme is 'prurient' according to the sensibilities of the average person of the community, (2) The material must depict sexual conduct in a patently offensive way, and, the third condition to be met simultaneously, and (3) The material in question must be taken as a whole (that is to say, not with one part taken out of context) must lack serious literary, artistic, political or scientific value. All three conditions must be met before something can be deemed obscene by a court of law.

'Prurient' is defined in Roth v United States (1957) either as having a tendency to incite lustful thoughts, or a shameful and morbid interest in sex. But this sub-issue of prurience would need to be determined by a jury, and the jury would need to be exposed to the materials in order to make the determination. Hence, the prosecutors could be guilty of the crime they are prosecuting -- distributing obscenity -- if the materials are found to be obscene. Further, a jury in Manhattan would have one standard while one in Alabama would no doubt have another. So right away, 'prurient' is impossible to define consistently.

Hence, the materials in question could be found to incite morbid lustful prurient desire, and also be patently offensive, but as long as they possessed a shred of serious artistic, political, scientific or literary value, they would not be obscene. And in the end, they could always possess scientific value simply as samples of obscene materials that scientists or psychologists could study.

Different obsecneity standards have been attempted over the centuries and decades, all of them arbitrary, value-laden, culturally specific, and essentially meaningless. Books depicting sex have, for centuries, been locked in the back rooms of libraries, while books depicting or describing murder have been generally available (this standard was not created by television). English society banned the word "fuck," despite the fact that it is the only, and oldest, single word describing sexual intercourse in non-medical terms in the entire language.

In this century, in this nation, there have been obscenity prosecutions over books including Naked Lunch by William Burroughs and the epic Beat Generation poem Howl by Allen Ginsberg, neither of which cases were successful at establishing obscenity. The Grapes of Wrath, The Catcher in the Rye, and a wide variety of other books have been accused of failing to meet public standards for decency, yet these works, too, are available and widely-regarded as excellent literature and significant historical documents.

Potter Stuart, the late esteemed jurist of the Supreme Court, in admitting his inability to formulate a coherent standard for obscenity, wrote in a ruling, 'I can't say what it is, but I know it when I see it.'

Perhaps he can't say what it is because to do so, and then to distribute His Honor's wisdom to school children who should, of course, be informed of society's standards of decency, would be to commit the act in question, revealing how hopeless it is to ban ideas or words.

In his nonfiction book The Brethren (about the Supreme Court) author Bob Woodward (journalist, author and editor of Watergate fame, the Woodward of Woodward & Bernstein) describes the 70-year-old justices of the nation's highest judicial body sitting around the court chambers for hours watching pornographic movies that had been submitted in evidence, deciding whether they were actually obscene enough to be put on trial.

But in the end, however, it works out that the court feels that sex really is for reproduction: you can only do it in the media, where it can be reproduced.++